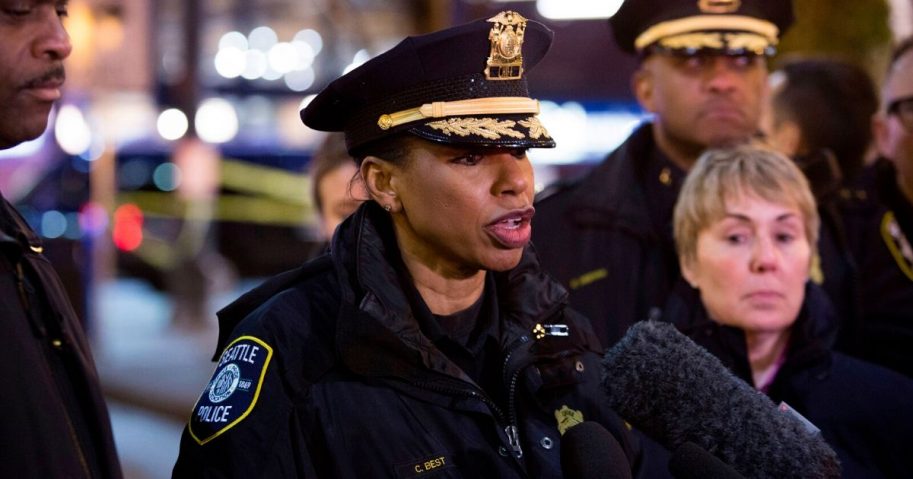 “The decision to board up the precinct — our precinct, our home, the first precinct I worked in — was something I had been holding off,” she said.

“You should know, leaving the precinct was not my decision.”

On Monday, following days of protests over the death of George Floyd, who died on May 25 in Minneapolis after a police officer knelt on his neck for roughly nine minutes during an arrest, Seattle police boarded up and left the East Precinct building, Fox News reported.

A crowd of protesters have since taken over the surrounding area and have made it an “autonomous” and “cop-free zone.”

Signs outside the barricade have hand-written messages including “Capitol Hill Autonomous Zone” and “You are now leaving the USA.”

Protesters even painted over the word “Police” on the Seattle Police Department’s sign and have replaced it with “people,” Newsweek reported.

“You fought for days to protect it. I asked you to stand on that line, day in and day out — to be pelted with projectiles, to be screamed at, threatened and in some cases hurt,” Best said in her video.

Do you think the governor should do something about this situation?

There were protests in the area all week and many grew violent; a man allegedly drove into a crowd of protesters on Sunday night and shot someone near the police building, according to Fox News.

The police chief added that boarding up the building and changing course “seems like an insult to [the officers] and our community” and that she was “angry about how all this came about.”

“Ultimately, the city had other plans for the building and relented to severe public pressure,” Best said.

“We had solid information to believe that anti-government groups would destroy the precinct once we left, whether through vandalism or arson.”

Best added that the Seattle Fire Department was on hand when they left to protect the surrounding community from any serious fire.

In a Thursday tweet, President Donald Trump responded to the situation in Seattle and commanded Gov. Jay Inslee to take back his city.

“This is not a game. These ugly Anarchists must be stopped IMMEDIATELY. MOVE FAST!” he tweeted.