We’ve been buried in bad news for months now. It’s time for some good news, and here it is: There is a simple, practical, common-sense way to stop the transmission of the novel coronavirus and reopen our entire economy without the need for social distancing.  This methodology could also be used in the future to suppress other dangerous pathogens that might threaten humanity.

After a few weeks of preparation, this comprehensive solution to the problem can be implemented in a single day. What’s more, a few weeks after that day is over, the coronavirus will be largely eradicated from the population, and we will also have the means to immediately suppress any future resurgence of the virus without shutting down the economy.

All this can be accomplished using just three tools that are well within our reach – self-testing, self-isolation, and secondary screening. And this plan won’t be imposed on us by the government. It keeps the power with the people, where it should be. It’s a very American plan, both in its efficiency and in the way it respects the autonomy and privacy of the individual.

Here is how National Testing Day (“NTD”) will work: On the morning of the appointed day, the president, his family members, and the White House staff will briefly insert the tip of a sleek little testing device – let’s call it a virometer – into their mouths (think: electronic thermometer), remove it, and wait a few seconds or a few minutes for the screen on the device to change color. One color means you’re a carrier; the other color means you’re not (think: home pregnancy test).

They’ll do this on national television and live-streaming video, and so will all the state governors and their families, members of Congress, Kim Kardashian, Kanye West, and hundreds of other celebrities and thought leaders.

Because our leaders and media influencers will have been hyping the coming of NTD for weeks, all 330 million of us will join in. And, thanks to the U.S. Postal Service, which reaches 99.83 percent of the U.S. population (who knew?), we will all have lots of those little virometers on hand.

Even many undocumented immigrants and homeless people will participate, thanks to outreach efforts by social service agencies and an army of volunteers.

That afternoon, the people who tested positive for the virus will start a two- or three-week period of self-isolation that ends when they test negative. People who don’t have a place to go will be provided one by local governments and service organizations.

And that same afternoon, the more than 300 million Americans who tested negative will be set free to reopen their businesses, go back to school, get a haircut, see a movie, or celebrate their freedom over a great dinner at their favorite restaurant – all without the need for masks or social distancing. Three hundred million people, set free.

What about the people who failed to self-test or who got bogus “false negative” results on their virometers? That’s where secondary screening – the safety net – comes into play. The postal service not only sent virometers to every home in America; it also sent millions of them to businesses, schools, churches, and stadiums.

For a month or two, or until the virus is completely eradicated, if people want to get inside a restaurant or theater or school, they will first need to test negative at the door. If they test positive, they’re sent home. This guarantees that people who should be in isolation remain there. It also means that in facilities where people are in close contact, they can interact without experiencing the fear that is currently paralyzing much of the world.

There is no such test, you say. But I know of at least one such test that is currently under fast-track review by the FDA, and a team at MIT recently announced the development of a test that looks even better.

You say: We can’t produce hundreds of millions of virometers in a short period of time. Of course we can, especially if the President invokes the Defense Production Act. If we need to make them even faster and cheaper, we can work with China. A single factory there can produce as many as 5 billion test devices in a single month.

You say: People won’t comply! Given how much is at stake and the astronomical price we have already paid for addressing the problem haphazardly, I’m guessing that virtually everyone will eagerly self-test and that virtually all carriers will happily self-isolate for a couple of weeks, especially if they’re offered a financial incentive. Everyone I know would certainly participate – anything to get this viral monkey off our backs.

Anyway, that’s what secondary screening is for. If you want back into school or church or a Yankees game, you need to test negative at the door. By the evening of National Testing Day, hundreds of thousands of us will already have had a second test.

It’s too expensive, you say. But the new MIT device is expected to cost only $6 per application. Produced in vast quantities. the per-unit cost will likely be well under a dollar. This entire program will almost certainly cost less than the $7 billion we’ll be spending this year on the census, even taking the usual inefficiencies into account.

Does this method really work? You bet. When all 3,000 residents of Vò, Italy were tested, and carriers were then separated from non-carriers, transmission stopped immediately, and the virus was soon eradicated from the town. When all 1,680 residents of Bolinas, California tested negative for the virus, the town sealed itself off from the surrounding area, and the town has remained virus free since. And when someone tested positive for the virus in a call center in South Korea, the next day all 1,143 of the people working in his building were tested, the carriers were sent home, and viral transmission stopped.

Jeff Bezos gets it. That’s why he intends to test all of his nearly 1 million employees. The carriers will be sent home for a few weeks, and everyone else will immediately be able to work without social distancing and without fear of infection. 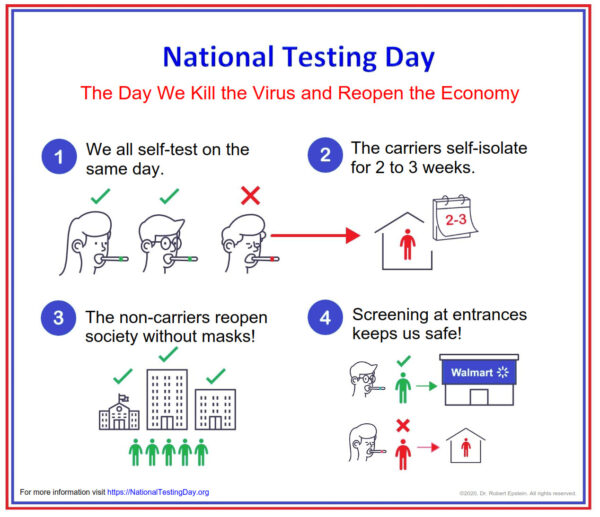 Every other remedy we’ve tried is a half measure at best, and some of the “solutions” people have proposed might do more harm than good. Masks and social distancing slow the spread of the virus, but they don’t stop transmission, and they don’t allow us to safely reopen the economy. Recruiting tens of thousands of contact tracers is prudent when you’re fighting a hard-to-spread virus like HIV but makes little sense for an airborne virus like the novel coronavirus. In some instances, contact tracing also exposes the investigators to carriers, putting them at risk of contracting the disease.

As for isolating the elderly and waiting for at least 60 or 70 percent of the population to become infected to establish “herd immunity” (are we cattle then?), are we really that ruthless? By my calculation, letting the SARS-CoV-2 virus spread freely in the U.S. would kill between 265,000 and 2.2 million of us over a period of months, depending on just how deadly this virus actually is. Ironically, the true case fatality rate is still unknown because we haven’t done enough testing to determine how many people are infected.

Trump’s latest promise – to get the virus under control by making a vaccine available to all Americans by the end of 2020 – in other words, by a date that’s conveniently well after Election Day –seems overly optimistic. With the economy having been reopened with millions of unidentified carriers still roaming around, by Christmas, tens of millions of Americans will have become infected – some with both the coronavirus and the flu, a combination that might prove to be especially lethal. One problem here is that once you have become infected with the coronavirus, a vaccine that protects you from it is useless.

For that matter, do we really want to bet the farm on pharma? Imagine the damage this virus will continue to do over time to health, jobs, and entire economies if the main way we fight it is to wait for a vaccine.

Anyway, as you might have already guessed, National Testing Day makes the vaccine unnecessary. Big Biopharma won’t like that, and NTD might also alarm the makers of hand sanitizers, masks, and ventilators. But think of the thousands of lives this program will save, not to mention the hundreds of thousands of businesses and millions of jobs – the airlines, restaurants, sports franchises, gyms, the entertainment industry, mom-and-pop shops, and so on.

I’m not big on conspiracy theories, but it has crossed my mind – and maybe it should cross yours too – that the main reason the leaders of our medical professions haven’t come up with the idea of a National Testing Day is that they’re joined at the hip to Big Biopharma. When medical professionals see a disease, they think treatment (often drugs) and vaccines (produced by both pharmaceutical and biotech companies).

But when a new communicable disease is spreading rapidly through a population, if you simply separate the carriers from the non-carriers, transmission stops. And if the vast majority of the carriers are able to defeat the pathogen with their own immune systems, the pathogen can be eradicated from the population long before treatments and vaccines are developed. One can still develop a vaccine, of course, but now there’s no need to rush.

Why must self-testing and self-isolation be done in a single day? Because if you spread out testing over time, as we are doing now, transmission continues, even if you eventually test everyone (so far, under 5 percent of the U.S. population has been tested). With carriers constantly mingling with non-carriers, the virus continues to spread unpredictably. That means many people who tested negative weeks or months ago are now infected and that they, in turn, are infecting others.

To halt transmission of the virus, separating carriers from non-carriers must also be done quickly; otherwise, once again, carriers will keep mingling with non-carriers, and the virus will spread.

Even if, for some reason, this simple, common-sense method is not used to end the current pandemic – which could mean that hundreds of thousands of people will die needlessly and that economic activity will be hobbled for another 12 to 24 months – the National Testing Day strategy should be considered in the future as a powerful means of suppressing new pathogens without shutting down essential societal systems.

Robert Epstein (@DrREpstein) is senior research psychologist at the American Institute for Behavioral Research and Technology in Vista, California. A Ph.D. of Harvard University, he is the former editor-n-chief of Psychology Today and the author of fifteen books. For more information, visit https://NationalTestingDay.org.